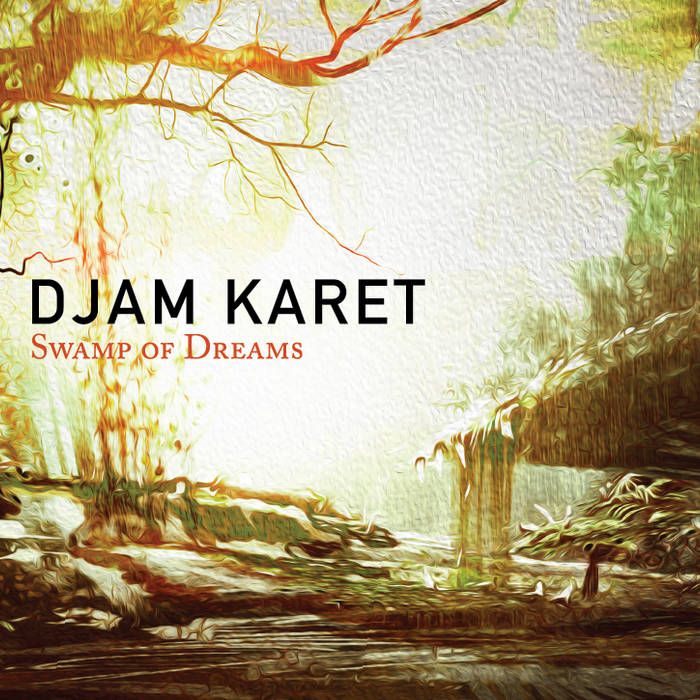 The music on Djam Karet's new CD "Swamp of Dreams" is a collection of older tunes that were originally only available as individuals tracks on different compilation CDs and fund-raiser albums, released between 1990 and 2006. These compilations and fund-raiser albums include: Holland's IO Pages Magazine's "A Decade Of Prog" CD, and a Hurricane Katrina/Habitat For Humanity fund-raiser called "After The Storm", among others.

And now with "Swamp of Dreams" we are making this long-lost music available again, this time to a wider audience. All of the music has been re-mastered with an increased dynamic range, and greater clarity and punch, while still retaining all that is good about the music of Djam Karet.

REVIEWS:
"Pink Floydian dreamscapes intersect with the jagged complexity of King Crimson and the improv-guitar happenstance of the Grateful Dead"
ROLLING STONE magazine

"Hose down your living room, or your furniture will be burned to a cinder by the intense guitar playing of Gayle Ellett and Mike Henderson"
GUITAR PLAYER magazine

"The most important band of the last decade"
EXPOSE' magazine

"One of the best bands in the genre"
THE WAILING WELL

"The ultimate Jam band...just a little ahead of its time"
RELIX magazine

"The writing, arranging and performances are of the highest order. Highly Recomended"
RECORDING magazine

"The near telepathic chemistry displayed by these four musicians was dead-on, and they proved themselves masters of their chosen instruments. This is one of the major releases of the year"
PROGRESSION magazine

"If you yearn for top-drawer, metal tinged prog chockful of classic synth textures, spacey yet incendiary dual guitars, and tight drum and bass grooves - this tasteful and well produced CD is for you"
GUITAR PLAYER magazine

"They will dazzle you with breathtaking instrumental performances"
SPACE (dot) com

"One of the finest bands in the progressive rock business. Highlights abound throughout, the band's rich legacy continues to unfold with each subsequent release"
ALL ABOUT JAZZ

"Unearthly voices speak to each other, as strange animal sounds provide a counterpoint to the chiming melody"
THE UNION

"A must have for any lover of good musicianship"
MUSIC EXTREME

"Their music has a sweeping, epic sound very much in the classic tradition."
ALL MUSIC GUIDE

"Progressive" in the purest sense of the term"
SEA OF TRANQUILITY

"Djam Karet is a highly sophisticated outfit and their music crosses many boundaries and they do it with ease. They are the best instrumental band in America"
KYND MUSIC

"Djam Karet have done a masterful job of moving their trademarked sound in yet another developmental direction. Their sound is easily identifiable being a mixture of psychedelic, symphonic, industrial and ambient. Highly recommended"
PROGRESSIVE EARS

"A band with more than 20 years of existence shouldn't need any introductions. Their 15 studio recordings talk for themselves and those who are very much into instrumental progressive music surely already have listened to music from this band"
PROG-PT

"This is real barnstormer with a fluid and spacy sound perfectly balanced against a fusiony, raging guitar attack"
RATE YOUR MUSIC

"Djam Karet continues on with the band’s tradition of producing some of the best instrumental progressive rock ever written. On Recollection Harvest, Djam Karet shows that they do what most bands of the genre don’t, they’re still progressing, creating adventurous instrumental progressive rock music. They simply do not rest on their past laurels. What other band can honestly say that? That being said, I give this album a high recommendation"
PROGNAUT

"If you're looking for modern guitar soundscapes to carry on the traditions of "Meddle" or "Lark's Tongues In Aspic", check this disc out"
JAMBANDS (dot) com

Djam Karet was founded in 1984, and continue making new music even to this day. So far, they have released 19 full-length albums, including the newest release "A Sky Full Of Stars For A Roof" (as well as 31 minor releases, EPs and compilations). The California-based instrumental group has often been called America's greatest undiscovered band. Discover for yourself the music that is Djam Karet. ... more

Bandcamp Daily  your guide to the world of Bandcamp